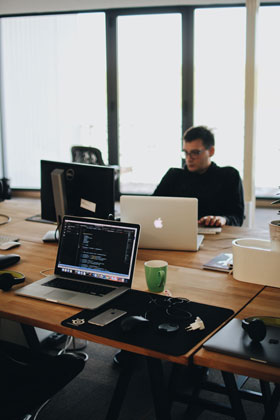 As a Microsoft Gold Partner, SoHo Dragon loves to highlight Microsoft products/services that we feel are cutting edge, innovative, and state of the art- just like us. Although we are most notable for our SharePoint expertise, we also provide services in BI, Staff Augmentation, and other hosted solutions. We like to think we are pioneers in the digital workplace!

Xamarin – What is it?

Xamarin is a product now owned by Microsoft.  The product was developed by engineers who created MonoMono for Android and MonoTouch that are cross-platform implementations of the Common Language Infrastructure (CLI) and Common Language Specifications (often called Microsoft .NET).

With a C#-shared codebase, .Net developers can use Xamarin tools to write native Android, iOS, and Windows apps with native user interfaces and share code across multiple platforms all from Visual Studio

So what does this mean?  The Visual Studio developers can now develop smartphone apps…  Oh Yeah!

Together these libraries are known as the Xamarin platform and consist of .NET versions of the native Mac, IOS, and Android APIs, any geek using these libraries can write applications in C# and to target the native APIs of these three platforms with a code once, deploy anywhere approach.

Use modern C# language to write code that can work cross platform:

References for a more detailed introduction to go Cross Platform with Xamarin:

And why should a Visual Studio Developer care?

How easy is it to learn?

C# and .NET developers will be amazed due to the following reasons, on how easy it is to develop cross-platform mobile apps.

If you are not a .net developer, then also you will spend less time in learning, as compared to learning different SDKs and programming languages Java for Android and Swift or Objective C for iOS. For Xamarin you will be required to learn only C# and common SDK and standard .Net classes across all three platforms.

What’s tricky about it?

Xamarin has an operational overhead as app size can grow proportionally as code uses more and more APIs. This is due to way .Net assemblies are linked as native code, into apps. This affects the download time, startup time of the app and amount of storage space that the app uses on your devices. So keep a watch on the APIs you keeping adding to project which will increase the size of the app, the example below:

The Dragon Developers’ do not recommend using Xamarin for customer-facing application as it will require attractive and robust UI, using Xamarin here will not be helpful as you will end up writing platform-specific code. We recommend Xamarin to be used to develop a cross-platform line of business enterprise apps where there is significant business logic.
Want to decide whether or not to use Xamarin Forms then refer this: http://cdn1.xamarin.com/Architecture%20Selector.pdf